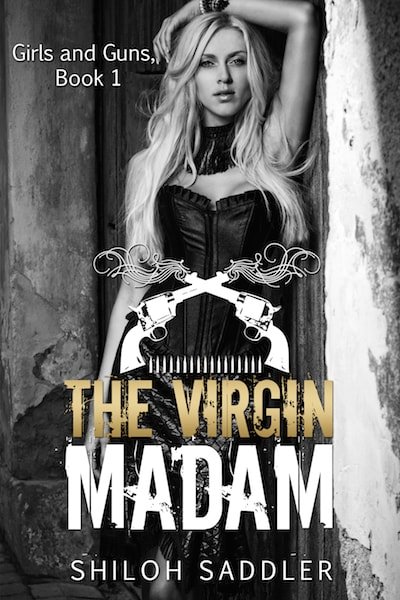 Today, I’m thrilled to have Shiloh Saddler on my blog to talk about her historical lesbian romance novella The Virgin Madam. She just released the second edition last month, and the cover is smokin’ hot!

The Virgin Madam is about Laura Rutherford, who inherits a brothel in 1879 Bitterroot Flats, California, after a member of the Fletcher Gang murders her papa. She secretly lusts after the working girls in her establishment, but thinks her destiny is to live life as a Virgin Madam. When Joe Bascum comes to the brothel asking for a room, Laura learns that this young cowboy is actually a woman in disguise. Sparks fly, but a member of the Fletcher Gang is hunting Joe for revenge. Will the outlaws prevent them from starting a life together?

Before we get to the interview, enjoy an excerpt from the novella.

Excerpt from The Virgin Madam

Where was I going to sleep tonight now that a man was in my room? Oh dear … I had forgotten to give him a towel. I grabbed one from behind the bar and hurried up the stairs, trying to figure out what I was going to say. It wasn’t proper for me to enter his room knowing he was taking a bath. But Mr. Wilson was breaking up a fight between two cowboys and he was the only man in my employ. I knocked on the door.

“Come in.” His voice cut off my babbling.

I swallowed hard. My cheeks burned even before I touched the doorknob. I opened the door, my eyes squeezed shut.

“You’ll run into the furniture if you don’t watch where you’re going.”

I opened my eyes, my attention naturally snapping toward the voice. Sitting emerged in the tub was Mr. Bascum—or rather Miss Bascum. I blinked at her small exposed bosom. “You’re, you’re a she.”

She laughed, the pleasant noise reverberating through the room. “Name’s Josephine, but don’t go spreading it around.”

“Why are you dressed as a man?”

Josephine let out a deep sigh. “That is a long story. The short answer is I’m safer traveling as a man, and society frowns on a woman wearing trousers, riding horses astride, and handling a gun.”

“I see.” And now I knew why I was attracted to this stranger—she was a beautiful woman with blue eyes I could easily lose myself in.

Interview with Shiloh Saddler, author of The Virgin Madam

Janelle: What inspired you to write The Virgin Madam?

Shiloh: I have a history degree, so when I began writing romance I naturally gravitated toward the historical genre. I was disappointed to see there were very few F/F historicals available. So I decided it was time for me to write my own. The Virgin Madam was my first published lesbian romance, and I am excited that is finally being re-released.

I grew up watching westerns, my favorite being Gunsmoke. Maybe that was why the first F/F idea I got involved a cowgirl and a madam. Laura and Josephine both came to me as fully formed characters. Laura inherits a brothel after her Papa is murdered. She thought she’d be trapped in Bitterroot Flats and lonely for the rest of her life until the tomboy Josephine struts into her life and wants to make her fantasies come true.

Janelle: I love it! My mom is a huge Gunsmoke fan, so as a kid I naturally developed the biggest crush on Miss Kitty, the show’s brothel proprietor. I always wondered if some of the women who worked for her weren’t setting up house together behind the scenes. How common was it for lesbians to pursue relationships in the Wild West?

The Virgin Madam takes place in Bitterroot Flats, California, in 1879. During this time it was definitely considered sinful to have intimate relations with the same sex, and there were many laws on the books making it a crime.

Laura Rutherford inherits her papa’s brothel after he is murdered. Becoming the madam makes controlling her urges for the working women even more difficult. She fights these thoughts and thinks she is a freak until she meets Josephine “Joe” Bascum, who has the same desire to share her life with another woman.

Josephine “Joe” Bascum dresses like a cowboy and has lived many years of her life as a man. I’ve read many historical accounts where one of the ladies has a boyish frame and parades around town with a woman on her arm. It is the only safe way Joe can be with a woman and it fit her tomboy personality well. From their first meeting, she wants to get Laura to come out of her shell and accept who she is. But will that acceptance lead to a future together?

Janelle: I can’t wait to find out!

Details on The Virgin Madam

2 thoughts on “Guest Author: Shiloh Saddler on lesbians in the Wild West”