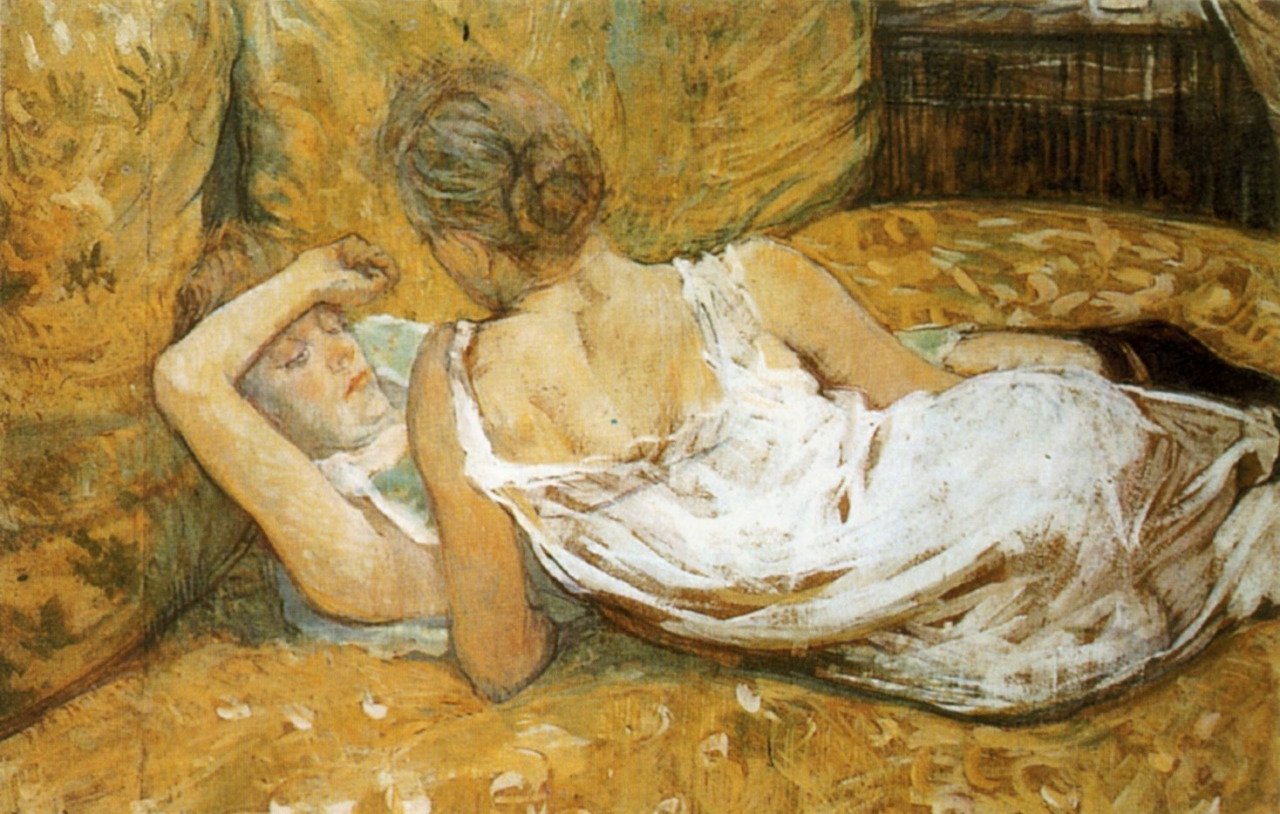 During his life, Lautrec spent a lot of time in Montmarte, the bohemian centre of 19th century Paris and home to artists, philosophers, writers, performers, and prostitutes. He spent a lot of time with the sex workers there, and discovered that many of them had intimate relationships with one another.

Lautrec’s depiction of lesbianism is particularly notable because it doesn’t fetishise sexual intimacy between women or present it as spectacle for the male gaze. Lautrec was trying to capture small, tender moments in the lives of the women he met, and he did so with humanity and sensitivity. In a world of constructed sexuality and fantasy, he finds the real relationships, and reveals to us the hidden lives of queer women in the 19th century.

Fin-de-siècle Paris was the capital of lesbianism. However, until the mid century, and despite the acknowledgment of male homosexuality, female homosexuality had been considered absurd. This scepticism was grounded in the fact that many nineteenth-century psychologists and medical professionals did not believe in female sexual impulse. Thus, when instances of lesbianism were reported in Alexandre Parent-Duchâtelet’s 1836 study of prostitution in Paris, lesbianism came to be understood as an activity associated with the Montmartre counterculture and, in particular, with prostitution. Indeed, deluxe houses of tolerance often functioned as specialty brothels that catered for a clientele with particular fetishes, such as tableaux vivants where ‘inmates, entirely naked, abandon themselves to homosexual practices on a large black velvet carpet or in rooms hung with black satin to bring out the whiteness of their bodies’. This was lesbianism as commercial spectacle, performed within a closed environment for male consumption.

Lesbianism in the public realm was a sexual preference that, while common, was negatively judged by French conservative society and for this reason was conducted with subtlety and partially obscured. In fact, many of the biggest stars of the Parisian circuses, dance halls and café-concerts were lesbian or bisexual, including Jane Avril and May Milton (whom, it is generally agreed, had a short-lived love affair), Sarah Bernhardt, Cha-u-ka-o and La Goulue. Whilst these Montmartre celebrities were depicted on multiple occasions by Lautrec, the artist chose to represent them as skilled professionals, never exploiting their sexual preference as the main focus of his compositions. So subtle was Lautrec in his treatment of these themes that art historians such as David Sweetman have gone so far as to argue that ‘It comes as something of a shock to realise that most of the women … were in fact lesbians and that quite a few were lovers. So many, in fact, that it is possible to argue that lesbianism is the hidden subtext of much of the art of Henri’s mature years.’

1. At the Moulin Rouge: The Women Dancing

Adding my favourite one!