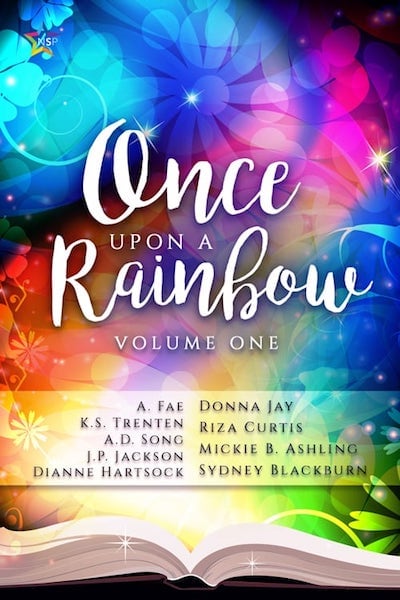 Release Date:  May 11, 2016 from Prizm Books; rereleased in November 2017 in Once Upon a Rainbow from NineStar Press

On the eve of my sixteenth year, I’m cursed to prick my finger on spindle and fall into a hundred year sleep. This is what the witch with the snow white skin and haunting dark eyes promised me, as I lay in my cradle. I haven’t been able to get her out of my mind, since. She haunts my dreams, steals into my quiet moments, when I think I’m alone. Everyone thinks she’s my enemy. Everyone thinks I need to be protected from her. I can’t think of her as an enemy, no matter what anyone else thinks. Who is she, truly? The only name she’s ever been given are a few, enigmatic words. The fairest of them all.

My first memory was of her dark eyes. They seemed to capture all the colors of my infant universe, even as they threatened to swallow me. Her eyes should have been terrifying, but they weren’t.

Her blood red lips moved, shaping words I could only dimly recall. My parents remembered them only too well, as did everyone else who’d gathered at the castle for my christening.

“I, too, have a gift for this child. She shall grow up, with all the beauty and promise of the dawn, but her sun will never rise.”

My mother told me she nearly swooned with terror at the look of sheer malevolence the witch gave to the sunbeams, playing about my cradle. She wanted to stop the witch from speaking, as did my father. No one could move, no matter how much they wished to. Everyone stood, still and motionless, spellbound by the witch’s gaze.

“Before the sun sets on the eve of her sixteenth year, the princess shall  prick her finger on a spindle. With the first drop of her blood, a sleep will fall upon her, claiming her for a hundred years.”

My mother tried to call in another witch to remove the curse. My father burned every spindle he could find. However, nothing could lift the curse, for all their efforts. The witch had disappeared into a cloud of green smoke. No one could find her after my christening, despite many attempts to locate her. The only thing she left behind, besides her curse, was the memory of her dark eyes.

Updated Dec. 2017: Torquere Press/Prizm Boks has closed, and though its former owners are still attempting to sell Fairest online, they are doing so in violation of the law. They are not forwarding any of the money to K.S. Trenten and no longer have her permission to sell the book.

You can get an authorized copy as part of the boxed set Once Upon a Rainbow, Volume One from NineStar Press: